My mother’s favorite dessert was key lime pie.  No matter where we went, be it a fancy restaurant or a hole in the wall, if key lime pie was on the menu, she was getting it.  Little things like that stand out in your mind after someone is gone, so I’ve found myself paying homage to this love of hers lately.  First with a sparkly slice of pie Christmas ornament and then with a key lime inspired smoothie.

I’ve never really been a huge fan of lime (except with my tequila!) so I knew I wanted to add another flavor to ease up the tartness a little.  Kiwis have always been a favorite of mine and hey, they’re in the green family too.  The mixture of the two flavors is refreshing and light and the addition of a pear gives it a unique taste and a soft consistency without having to add yogurt or milk.

I don’t like my smoothies to be sickening sweet either so I always opt for an “alternative” sweetener like stevia, xylitol or agave.  You can also use honey in place of the agave if you want.

It’s not as decadent as a piece of key lime pie but I think my mom would still give this one a thumbs up! 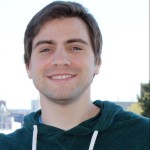 This post was posted in Fruit Protein Shake Recipes